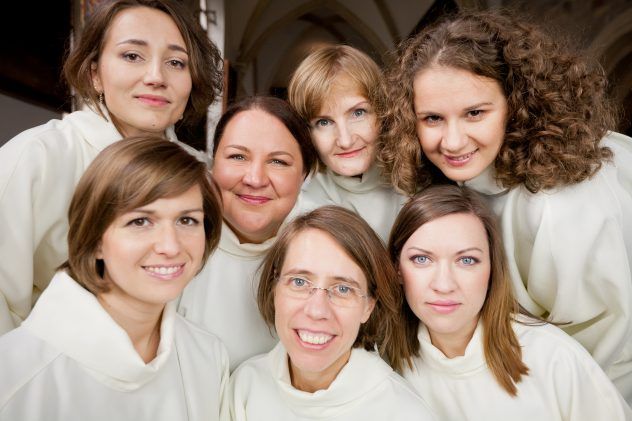 The Flores Rosarum (rose petals) vocal ensemble was found in 2007 by Sister Susi Ferfoglia and a group of female singers fascinated by the music of St. Hildegard of Bingen. Her works have become a core repertoire for the ensemble; this also reflects in the band’s name which refers to one of Hildegard’s responsoria. The interpretation and the promotion of the music by the unique Saint Lady of Rhine has become an X-factor of the group, making it recognizable all over Poland. Flores Rosarum have performed one of most interesting works of St. Hildegard’s: a morality play called Ordo virtutum. This project was premiered in Autumn 2013, in cooperation with a Swiss ensamble Peregrina, directed by its leader, Agnieszka Budzińska-Bennett.

Flores Rosarum have had also an occasion to perform again together with Peregrina, this time in the later repertoire – the polyphony of Sisters Benedictines’ archives. The ensembles’s members take numerous extensive artistic and scientific activities, what helps them in a deep research into the manuscripts every time they start a new project. Knowing the details of medieval notation, as well as liturgical, historical and social contexts of the chants, opens the way of interpretation focused on the faithfulness to the original source.Flores Rosarum performs also the Polish repertoire from the liturgical-musical manuscripts. For a few years they have been promoting the chants from the Archives of the Cracow Cathedral Chapter, of Sisters Benedictine of Staniątki, and Sisters Poor Clares of Kraków and Stary Sącz.

The results of that research are projects such as: — Life of St. Stanislaus after Vincentius of Kielcza (akkk Ms 52, ca 1320)

— a CD with the chants of Staniątki Abbey (Venite, exultemus Domino. The Chants of Virgins Benedictines from an Antiphonarius written in time of Abbess Dorota Szreniawska, 1536)